The cervical spine has been a known source of dizziness since the 1950’s with a classification as cervical vertigo. While the true spinning sensation of vertigo is not common with cervical spine issues, a feeling of imbalance, disorientation, light headedness, swaying, and unsteadiness have all been linked to problems in the cervical spine, especially the craniocervical junction.

Cervicogenic vertigo may or may not exist as it’s own unique clinical entity, but there’s little doubt that the cervical spine plays a key role in balance and equilibrium. In this article, we’ll talk about how a dysfunctional cervical spine can be causing dizziness, and how cervical spine interventions can be a useful therapeutic option for people with dizziness disorders of many types.

The Anatomy of Cervicogenic Dizziness

While the diagnosis of cervicogenic vertigo has been contentious, the anatomical connections linking the cervical spine to symptoms of dizziness are not.

The neck is loaded with receptors that help the brain know where the head is in relation to the body. These receptors come from the small suboccipital muscles, the cervical discs, the cervical joints, and the cervical ligaments. The receptors from the suboccipital muscles in particular have an unusual amount of density when compared to the rest of the spine [Source]. When you move your neck, these receptors help to control how fast and how far you move your neck. They are also receptors that are very active even if your head isn’t moving because we spend most of our time with our head up fighting gravity. All of these signals are transmitted to the brain which has to make constant decisions about where to put the head next. 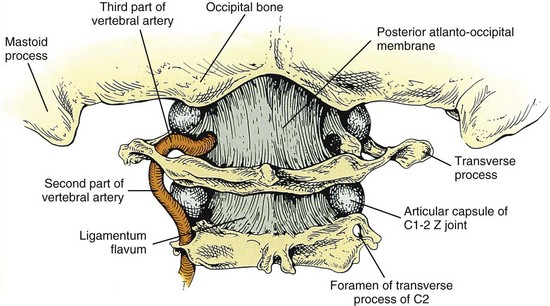 When you have an injury like a whiplash or head trauma, the muscles and ligaments of the neck are susceptible to injury, and that injury takes away one of the methods that your brain uses to keep track of the head. If your brain can’t tell where your head is in space, then dizziness and a sense of imbalance is the result.

The cerebellum and vestibular nuclei are 2 really important parts of the brain that play a role in dizziness and balance problems originating from the neck.

These regions of the brain are important because the same muscles, ligaments, and joint receptors we discussed earlier have direct and indirect connections to the vesibular nuclei and the cerebellum.

The vertebral artery passes through the transverse foramina in the cervical spine. At the level of C1 and C2, the vertebral artery takes on a more tortuous path into the skull to supply the brain stem and cerebellum with oxygen. Most clinicians think of the vertebral artery as a potential source for arterial dissection that can cause stroke. However, there are documented cases of transient vertebrobasilar insufficiency caused by rotation of the neck. This syndrome has been named Bow-Hunter Syndrome or rotational vertebral artery vertigo (RVAO). [Source]

Studies have shown that decreases in blood flow from the vertebral artery can cause transient ischemia through the vertebral artery when the neck is turned in rotation. It’s not known whether the ischemia is affecting the brain stem/cerebellum, or if the ischemia is hitting the labyrinthe itself because of the way the artery branches out toward the peripheral vestibular apparatus.

Therapies for the cervical spine can make an impact on cervicogenic dizziness. These therapies can commonly include cervical exercises, osteopathic manipulation, upper cervical chiropractic approaches, and other manual therapy techniques. The use of these modalities has largely been associated in patients who have reported dizziness following a trauma to the neck such as whiplash disorder [Source].

Is there a role to play for cervical spine-based therapies for other causes of dizziness and imbalance?

While there’s limited evidence to pull from, there are numerous anecdotes and case reports of patients with motion sickness, Meniere’s-like illness, and vestibular migraine showing improved outcomes while receiving care focused on addressing cervical spine dysfunction.

Let me be clear, I have no supporting research to support what I’m going to say next. These are just observations from 8 years of working with dizzy patients.

Many patients with feelings of dizziness but do not have full peripheral vestibular loss likely have problems of central processing of sensory information. Plastic changes in the central nervous system that can promote a sense of dizziness can include:

By understanding some of the interconnected nature of the senses that produce a feeling of balance, we can leverage treatments to create neuroplastic changes in the central nervous system that may help a person adapt when vestibular function is compromised.

When it comes to dizziness, there are so many anatomical players and varying degrees of compromise, we can’t rely on one thing to fix all types of dizziness. By using the cervical spine to help stimulate the proprioceptive system, we might be able to help some patients compensate with a deficit where they weren’t able to before. We may also be removing one extra stressor to the balance system that was preventing the body from compensating appropriately.

Want to join the discussion?
Feel free to contribute!

The best exercise to fix your own neck

PreviousNext
The Downside of Listening to Your Body Too Much

New Study Examines the Effect of Chiropractic on Patients with Previous Str...
Scroll to top